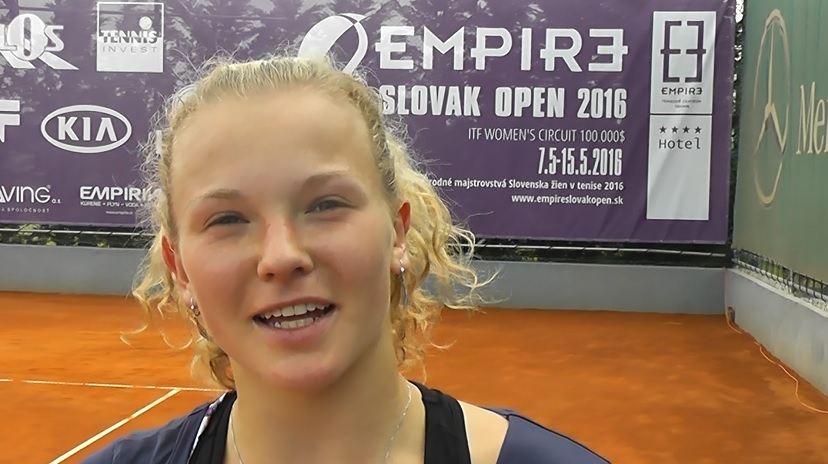 First and second round matches were played on Wednesday at EMPIRE Slovak Open 2016, first quarterfinalists are already known. Sevastova, Eguchi, Siniakova and Pliskova, who eliminated Slovakian Jurikova, are all amongst best eight. Only 16 years old Vondrousova also made her through, as well as Slovakian Jana Cepelova. Biggest clay tournament in Slovakia will see at least one Czech semi-finalist; Katerina Siniakova will play Kristyna Pliskova in the solely Czech quarterfinal.

Siniakova surprised in the second round eliminating second seed Turkish Cagla Buyukakcay in two sets 6-3, 6-2. "I am very happy to beat number two of the tournament. There are great players in the draw. I managed to put her under pressure and finish off the rallies. I did not do many errors, I played well," said Siniakova about her performance. "I played with her twice before, I was prepared. We try to prepare separately for each player the best tactics together with my coach. I want to get as far as possible here in Trnava. I’d be very happy to win it. I am here third time, beautiful tournament. I will fight for every ball, to make the best of it," added WTA No. 124.
Kristyna Pliskova beat Slovakian Lenka Jurikova 6-4, 6-2 in the second match of the day on central court and she stopped surprising run of the Bratislava born player. Jurikova reached second round from the qualification.

Only 16 years old Marketa Vondrousova is the surprise package of the tournament, beating ten years older Anna Tatashvilli in three sets 7-5, 4-6, 6-3. She will play against talented Viktoria Kuzmova in the second round on Thursday. Head to head is 4-1 in favour of the Czech player, but three matches have ended in retirement of one of the players. "We played together with Viktoria several times, but from those five matches, we finished only two matches, one of us has retired in the rest of the matches. It will be a great match, Viktoria is in good form. I am looking forward to it," she added.

Cepelova on the right track

Jana Cepelova won her match in 80 minutes 4-6, 6-4, 6-4 against 24 years old Romanian Andreea Mitu (WTA No. 116) in singles Round 1. Twenty two years old Kosice born player, at the moment WTA No. 125, will fight for the quarterfinal against Slovakian wild card holder Rebecca Sramkova. Slovakians are sure of one quarterfinal place.
With her coach Martina Zathurecky, this is her fifth appearance at this tournament and she finally got through the first round, after being eliminated in the first round in 2009, 2011, 2013 and 2015. In 2011 and 2013 she played doubles final together with Lenka Wienerova, Karolina Schmiedlova respectively.  "I did not think about my defeats here. I will try to do my best in the second round against Rebecca," said Slovakian Fed Cup player.