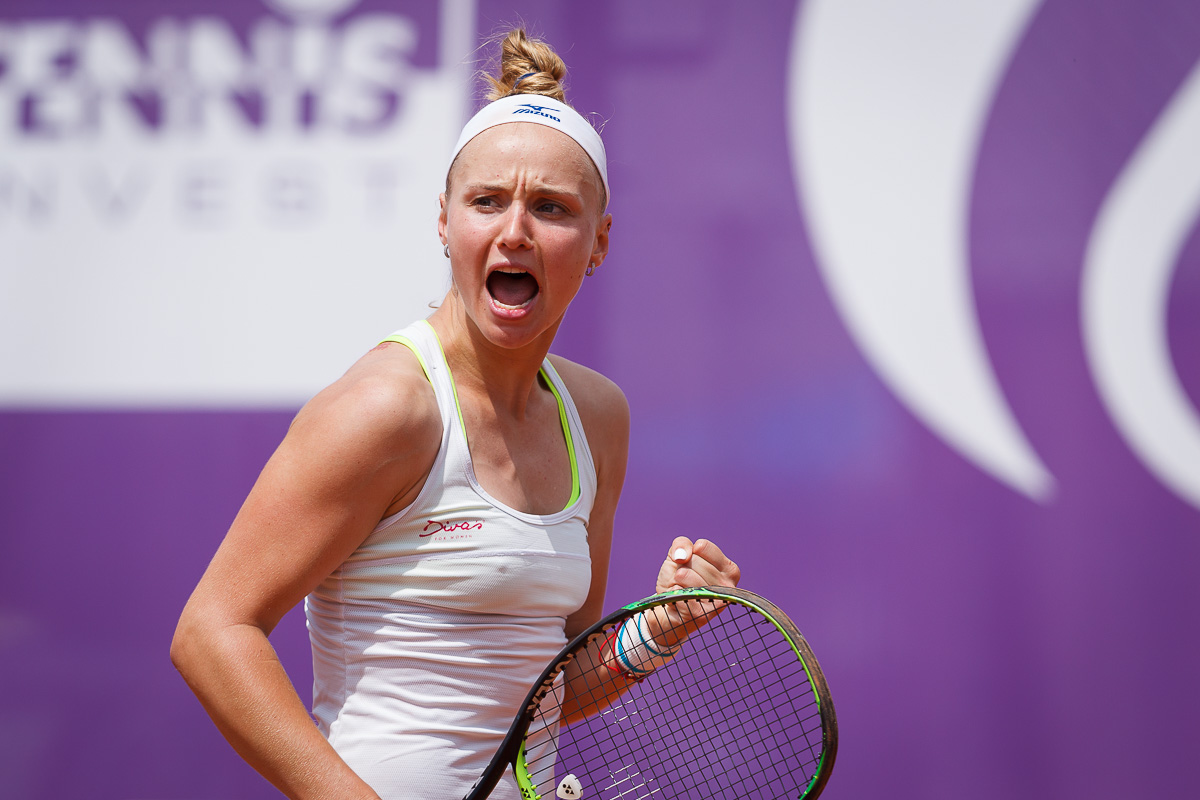 Schmiedlova took the lead 3:0 in the first set but Sramkova equaled to 3:3. The set was decided in the tie break, the same story was in the second set. Sramkova finally won in two tie breaks 7:6 (5) and 7:6 (5). „Of course, it's difficult to play against a friend. Especially when you play at home. But I'm glad I won and I was better on the court. I was afraid not to take advantage of playing aggressive tennis, and not sustaining it with fitness. I'm glad it ended in two sets only," said Sramkova after her victory.

Specific duel of two Slovak players offered great tennis for spectators. "I think we both kept a cool head and I'm glad I won. There were many important moments, I made a lot of unforcesd errors. She helped me a bit with her return errors. It was very equal, result 7:6. 7:6 clearly confirms that. I was surprised how many fans were watching. It must have been really interesting match for them," Sramkova continued.
"I pulled my muscle at 4-4 in the first set, the reason for not playing a whole week. But I knew how to fix this so I finished the match," said EMPIRE Tennis Academy member, whose base is in the local club in Trnava where she has ideal conditions for preparation at any time. "I've got everything I need here, sparring, coaches, massages, psychologist, it's really great."
And did they have a few words before the match? "We were talking about whether we could go for one shot before the match to get rid of butterflies in a stomach, but we both stayed cool," she added with a grin.

Anna Karolina Schmiedlova, seeded 2 confirms: „What can I say, today it did not work. Rebecca played well. Obviously, I feel sorry. I wanted to play better here. But at least Rebecca is the one who reaches next round, she deserves it, played with guts. Her game is more aggressive, she was hitting hard. we both had a lot of chances in both sets, and it could have easily finish vice versa. She took it into her own hands at important moments. It's not that convenient to play against each other, but we don’t take that so seriously. I think we'll still be friends. Doesn’t matter who loses or wins in such match. Obviously, I wanted to win. I gave it everything, but it did not work out,“ added Schmiedlova born in Kosice.

Viktoria Kuzmova, last Slovak on center court, was more successful when she first defeated Ons Jabeur of Tunisia in two straight sets 6:1, 6:2. Later in the very late evening with her partner Tereza Mihalikova (SVK) they were also successful in a battle royal on court 14. They overwhelmed number 3 seed partnership D.Jurak (CRO), C. Lister (SWE) in three sets 7:5, 3:6, 16:14 in a match tie-break.

Play resumes on Friday at 10:30 AM after Thursday’s play was again washed away by rain. The only match to be finished was doubles QF played indoors Alena FOMINA / Ekaterina YASHINA - Albina KHABIBULINA / Anastasiya VASYLYEVA 6:3, 6:2.