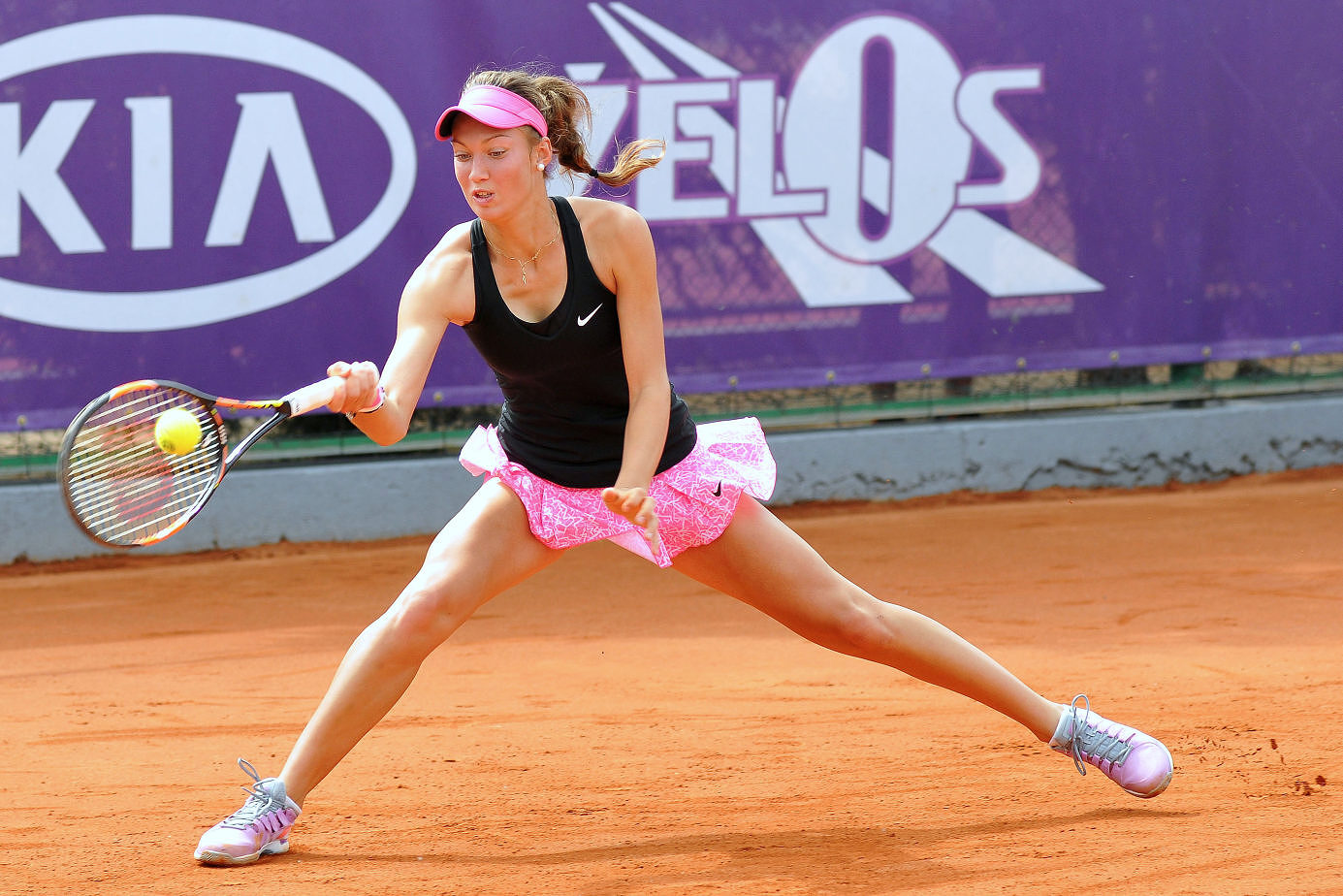 Tereza Mihalikova (17), new EMPIRE Tennis Academy member, is one of the most recognised junior players at her age. In 2015, she won girls singles at Australian Open, year later she was in the singles final and won the doubles. She already made herself name amongst women, winning four ITF tournaments, two of them in current season. In the WTA rankings, she occupied her career best No. 466 recently. She was given wild card at EMPIRE Slovak Open 2016.

Do you recall your beginnings in Trnava or anything interesting from youth categories?

"I recall playing a match against Tamara Kupkova and I lost. It was Slovakian Championship match. I played here semi-finals of Trnava Cup, U14 tournament. I won against Miriam Kolodziejova from Czech Republic in the quarterfinals but lost afterwards against Katarina Stresnakova in the semis."

You already played twice at the biggest women’s tournament in Slovakia, EMPIRE Slovak Open. In 2014 you lost against Nikola Vajdova 0-6,2-6 in qualifying and last year you fell short in the first round of the main draw against Croatian Petra Martic (4-6, 4-6).

"From the first match I only remember strong wind; Nikola did not really give me any chance. I won at least 2 games. Last year, it was not so bad.... Against Martic, I could have won at least a set, but I could not finish it up in both sets. I was unable to win my service in the first set. In second set I was break up, but could not finish it off. It was very tight game though."

You reached semi-finals of doubles with Kristina Schmiedlova in 2015...

"We almost lost the first doubles, we won the match 10-8 in the third set. We lost the first one 2-6, afterwards we tried different things, played volleys and I think we have confused our opponents (Croatians Fettova, Lekajova) and we won in the end. We played in the quarter-final against number one seed Krejcikova and Vorackova. It was all about revenge, because Kristina has lost against Krejcikova her singles match and we really wanted to win it. Then in the semi-final, it was close, pity, we did not win it. We were definitely capable of it."

If you compare TC EMPIRE with tennis clubs abroad, how do you like it here in Trnava?

"Absolutely fantastic. I already said this to the club groundsman. When I had a camp here at the end of April, courts looked like at the end of summer - hard, incredible, perfectly prepared. Courts in Bratislava and Topolcany were soft, I had problems with movement on them."

Do you expect support from fans playing at home?

"My parents are not home during the tournament. My cousin will be here, my grandma and grandpa will most probably come to watch me. Some people from Topolcany will come for sure, maybe whole bus... They were making fun of me, they will come and see me play at grand slam one day in a bus and will camp on site."

Do you feel nervous playing at home or you don’t really care where you play?

"I don’t know, don’t know really, I mostly loose at home. Not really good I know. I am not nervous, but I always loose..."

Time to change this around...

In April 2016 you played for the first time in Fed Cup against Canada. What are your impressions?

"It was difficult to support the team from the stands. It was harder than playing. I did not feel such tired even after playing four hours match. And I was on the bench during both matches. I tried to support the team loudly, before against Australia we were pretty quiet. I had the opportunity to play with every member of the Slovak team. I am glad I played doubles against Canada as well."

You were feeling more relaxed playing doubles, match was already decided in our favour.

"We tried different things. Jana Cepelova told me to cross the court whenever I want, we had nothing left to play for. I did not have many opportunities, because they tried to play everything at me, after Jana’s serve with full power. It was close once again. If we had played third set, we would have won. In super tiebreak it was a lottery."

"Atmosphere in the team is always better. You have a captain and other players supporting you. There are always fans, chanting Slovakia! I enjoy playing team competitions."

Before playing in Fed Cup, you had played at Junior Championship in China, where you came 5th. How was it?

"I left for China after playing 10K tournament in Bahrain, where I won the title. I was very tired in the first day. It was very weird, we played with Prince balls. Weather was bad, so we trained indoors, but we always had something to do. I did not spend much time practising. There were photoshoots, ceremonies, it took us hour from the courts to the hotel… They added some trips to see pandas..."

Was it any good?

"My only goal was to win the first round, which I did not do. Fortunately, I won both matches afterwards. Only positive is I have some wild cards for ITF tournaments and prize money."

You have four 10K ITF titles, two of them this year. When are you planning to play bigger tournaments?

"I hope I will not play any 10K tournament anymore... I have wild cards to play at 25K events, some more will add to it after Masters in China. When I make some good results at those bigger tournaments, I will not have to play anymore at 10K tournaments. That is my goal, to move forward and improve."

In the beginning of the year, you played your first WTA tournament in Auckland and you hard wild card for Australian open qualifying. Was it interesting experience?

"It was great, I had many sparing there. Many players did not want to play with me. Most of them were with coaches."

They do not accept lower ranked players?

"They don’t accept even players in front of them, or at the same level. It does not matter, whether you are No. 20 or No. 200. One coach was with four players on a practice court. I played with Kirsten Flipkens, Kristyna Pliskova and Paula Kania. It was great, because I saw those players and realised what do I need to improve. I could have won the first round in Auckland. I hope I can make it back next year because of my ranking."

Which granslam tournament do you like most, having played at all as junior?

"All four grand slams are specific. Australian open is most friendly and open for players. They pay for the flight tickets for ATP and WTA players, you receive vouchers into shops, and you can choose your clothing. These tournaments also have negatives, but there are only few in Australia. In Wimbledon, accommodation and food was horrible. In America, at US open, the hotel was very far. Least favoured and ugliest for me is Roland Garros."

How long do you co-operate with your coach Jan Studenic? How come, you are together for so long?

"We are together since nine. I don’t know why, I already got used to him. I cannot imagine having someone else as coach."