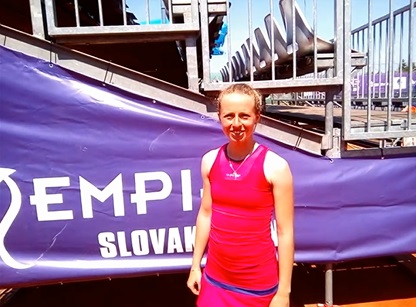 Second round of EMPIRE Slovak Open 2017 qualifying singles was played in Trnava on Sunday. Laura Svatikova of Slovakia surprisingly moved to the qualies finals when her opponent Hradecka pulled out injured.

Lucie Hradecká withdrew from the match when leading 6:2, 2:5 in the second set, since she could no longer play because of constant pain in the neck.
"First of all, it is an incredible feeling, even when your oponent pulls out, but win is always a win. I wish my opponent quick recovery. Yesterday, I saw that she had a taping on her neck, so it was limiting her. But I let go of what I knew. In the second session, my oponent was treated, that needed concentration from my side. I kept saying to myself:  stay in the match, be concentrated, focus on every other ball," said Svatíková after the match, this result for her is great success.

"So far I had 8 points in the WTA rankings. This result mens equaling of my careers best since last year in Hungary in Budapest I reached qualifying finals at ITF 100 000€, too. But to defeat number 151 in the world is a great trophy for me," added Slovak player who just recently played in the Slovak women's extraligue for Hlohovec - with 5 wins and 1 defeat.

Michaela Honcova is the second Slovak player to reach the qualies finals. "Match was full of quick rallies, almost no short rallies were played. I did not know the opponent, she is still young junior, I saw her playing for the first time. She went to every ball, either it was a winner or an error or she opened the court," added number 342 in the WTA rankings. Honcova will meet in the qualies finals Nicole Melichar, an American player born in Brno, Czech republic, doubles specialist.
"I know Niki very well from the WTA circuit, she is a doubles specialist, she plays singles play only at the tournaments where she plays alongside the doubles. I was playing against her three times in doubles, I lost all the matches but I know what to expect from her," added Honcova.