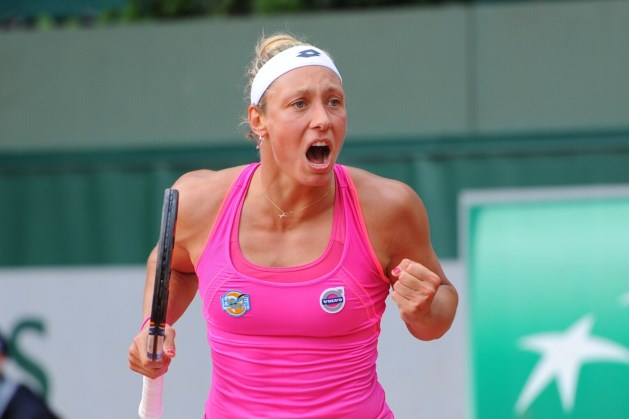 Yanina Wickmayer was fighting hard in the first round match with young Czech player Monika Kilnarova, finaly she succeeded in two sets 6:4, 7:5.
„I haven’t played many matches lately, so it’s tough to get into the rhythm. I’ve been practising well and feeling well but playing matches and winning them it is a different thing so I didn’t feel great out there but I won and what’s the most important for me right now is to win matches and play as many as I can.
It’s tough to play against juniors, I have never played them and they have nothing to lose so that the most dangerous point about it, they are still young and they don’t think too much so they just hit and play so it is never easy to play them so that’s why I am happy I did what I had to do to win today,“ said for www.empireslovakopen.sk Wickmayer, who played in Trnava for the first time in 2015.
„I feel well in Trnava, it’s a nice place to practice and to play, so I am really happy to get through today and to get a chance to play another match.,“ added Wickmayer who plays German Tamara Korpatsch in the next round.
Slovak young hope Rebecca Sramkova, last years singles semifinalist, lost in the first round to Veronica Cepede Royg of Paraguai in straight sets 2:6, 4:6. Another Slovak player Anna Karolína Schmiedlova lost in the last match of the day to Russian Jekaterina Alexandrova in 3 sets 3:6, 6:2, 2:6.

Another Slovak and wild card holder Viktoria Kuzmova was much more succesful when after 2 hours 32 minutes of battle royal she defeated Asian Muhammad 6:3, 3:6, 7:6 (2).
„I'm glad I managed to finish the match since it was thrilling till the end. After the matchpoint I did not convert I was a bit nervous but I was trying not to think of it. I've already defeated her in the past, but it was on hard. It was different at the time and I had a good bunch of victories. I believed in myself in each stroke. The atmosphere in the stands was unbelievable, people were supporting me a lot, I'm glad I finally did it," said Kuzmova, who will play in the second round British Heather Watson, former number 38 in the WTA rankings.